Heading 60 degrees north Somewhere off Long Island
Looks like tracking software has lost the link. We did not sink off Atlantic City!

Perfect timing for a:

Second Early Morning Storm
My good fortune to be on deck as a strong storm cell was approaching from the West arrive about 0030. Duncan was at the helm when I came on, and we struck the main sail and batttened down the hatches as we watched the heat lightning and listened to the rumble of thunder and the occasional unwelcomed water strikes of otherwise spectacular lightning. What was a very light moonlite sky was turning jet black very quickly. Pete came on to replace Duncan just as the rains and some gale force winds hit. Pete and I hunkered at the stern in our fowl weather gear and safety harnesses and yes, goggles, pelted by a stinging but exhilarating horizontal rain. As the center passed, the lightning was, as Pete remarked, “bright enough to be painful.” The stainless steel stanchions of the life rail caught and magnified our temporary ring of fire.

Some tasty bluepoint oysters at: 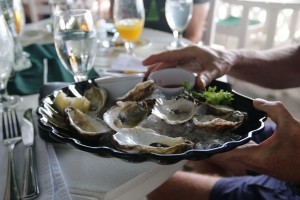