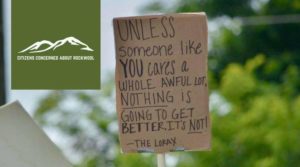 Despite the fact that site work has begun on a planned 460,000-square-foot insulation factory on 130 acres in Ranson, W.Va., opposition to the project continues to grow — within Jefferson County and beyond. The Rockwool insulation plant would crush and melt rock using coal and natural gas. Although the proposed plant’s owner, the multi-national ROXEL, has already obtained several permits required for construction and operation, others are outstanding.

A Facebook group focused on sharing information about the proposal, Citizens Concerned About Rockwool, has been gaining several hundred new members each day. Now, concern in adjacent Loudoun County, Va., is growing east of the Blue Ridge. Business owners, agri-tourism operators, and residents are alarmed about the 138,000 tons of pollutants the 21-story smokestack will pump out. These include particulate matter, formaldehyde, and sulfur dioxide — all of which will reach Loudoun skies, and therefore its soils and waters.

Loudoun residents, like their neighbors in West Virginia, have been taken by surprise, especially because a West Virginia factory proposal would not work its way through a Virginia jurisdiction’s planning process. However, because a number of federal air pollution permits are required for the plant, Loudoun residents and others downwind would likely have standing to challenge federal permits.

For more on the reaction in Virginia, see this article in Loudoun Now.