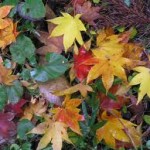 How often do you think about gravity? Not even in the fall? The season kind of named for gravity?

Not even when seemingly weightless orange, gold and red leaves glide towards the Earth, pulled inexorably toward its center by a powerful force that you can’t even see?

Or when those leaves land gently in a tiny mountain stream and tumble over rocks and drift through pools and float downstream into larger tributaries?

Or when a river seems to swallow the leaves up, once they finally reach its wider waters?

Gravity is one of those things we take for granted, but it’s fundamental to just about everything on earth. Including water, as writer/editor David Lillard notes in a commentary for Blue Ridge Press. Water flows downhill and, as The Downstream Project founder George Ohrstrom II likes to say, “we all live downstream.”

This fall, the U.S. Environmental Protection Agency and the Army Corps of Engineers are accepting public comments on a proposed rule that will determine what waters are covered by the federal Clean Water Act.  The agencies based the rule on the findings of EPA’s independent Science Advisory Board which, after reviewing about a thousand scientific studies, confirmed that, indeed, water flows downhill. The scientists concluded that headwater streams – and other waters that we might often take for granted (such as seasonal streams) – are indeed connected physically, biologically (hey, those leaves carry a lot of organic matter), and chemically to larger water bodies downstream.

The American Farm Bureau Federation is attacking the proposed rule as government overreach, fearing that farm ponds, irrigation ditches and occasional wetlands will be subject to regulation. EPA maintains that normal farming operations will remain exempt under the Clean Water Act, just as they have been for decades. And farmers in the Shenandoah and Potomac Valleys aren’t sure what to expect.

It may take several more falls (and a few more court cases) to fully resolve the legal implications of new rules. But few can deny the reality of gravity and the complex connections it drives. Like it or not, our waters are indeed all connected.

To submit your comments to EPA before the November 14 deadline, click here.